The worlds best selling 3 wheel scooter had been given a substantial update for 2022 with a sporty modern design, updated tech and a new engine.

On the surface, the new MP3 530 is sharper and more aggressive while maintaining the distinctive MP3 family design. The front is improved with the addition of a new LED headlamp with Blade style daytime running lights,  the bike now has twin high and low beam lights for better on road presence and significantly improved illumination of the road. the front indicators are now integrated into the body and the front grille is smaller.

The rear end has been given a significant update with a light bar LED rear light, automotive inspired rear “diffuser” and motorcycle inspired number plate holder now supported from the engine, smartening up the rear end.

The new MP3 introduces hi-end technical equipment to set performance, comfort and stability to a level never seen before in this segment. Starting with the keyless ignition, controlled by a fob this allows remote unlocking of the vehicle and also includes a bike finder feature that activates both the lights and horn.

The switches have also been updated to allow easy access to the host of new features, the left hand switchgear now includes a toggle switch for Cruise control and a 4 button joystick for selecting options in the menu while the right hand switch has the same features but has an updated design. 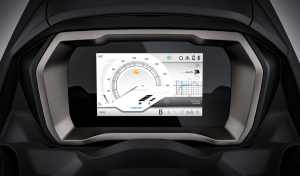 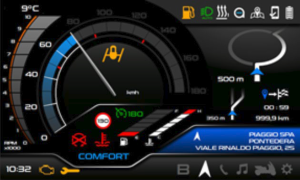 One of the biggest updates as a user is the new 7″ TFT screen, unique in the 3w segment this provides easy access to the large number of new features. The screen itself has a day/night function to ensure maximum clarity of information regardless of lighting conditions, other new features include  navigation through the Piaggio MIA system, battery level of connected phone, blind spot monitoring and 2 trip computers. 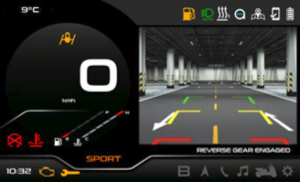 The 530 Exclusive has, for the first time on a 3 wheel scooter been equipped with a reversing camera that is activated with the reverse gear. This makes parking in tight spaces a doddle.

Thanks to some serious engineering on the chassis the vehicle is lighter than the outgoing model, the front suspension arm alone is 1.1kg lighter this makes for a more responsive and engaging ride. The footboard has been lowered by 20mm giving more space for taller riders. The seat has also been redesigned for increased rider and pillion comfort.

The new 530cc HPE engine is the most powerful in the 3w market, the engine has been given a thorough overhaul including the use of a new lightweight forged piston and new cylinder head with bigger valves for improved airflow . The result of this is a maximum power figure of 44.1hp and 50Nm of torque which is now produced at a lower RPM the the 500.

On the road this makes for better acceleration but also upto 10% better fuel economy and 2db quieter in urban settings.